The key fact of square roots is that they can be multiplied. For example, we can do

We know this works because

This also works for numbers that don’t have whole number square roots. For example, we can say

even though 5 and 20 don’t have simple square roots.
We can check that this makes sense with a calculator. We know

, and on a calculator we can get

. Now on a calculator we get

You can divide square roots similarly. For example,

Since we can multiply square roots, we can also simplify them by breaking them up. Let’s try an example: simplifying

is the fully simplified form of

can’t be simplified any further; we’ve taken as much out of the square root as we can.

Multiplying square roots by themselves

Often on the SHSAT, you see a square root multiplied by itself, like

. Since we know square roots can be multiplied,

Is it just a coincedence that

? No! In fact, multiplying the square root of a positive number by itself always gives you the number! This is actually basically the definition of a square root. A few examples:

This trick can save a lot of time, especially with bigger numbers.

So what kind of square root problems might we see on the test? A lot of the time when you see square roots, they are in geometry problems. A couple examples:
q) What is the area of the figure? 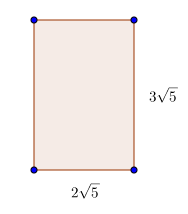 Note: Sometimes we leave out the multiplication sign with square roots, so when you see

, it’s the same thing as

We know that the area of a rectangle is base x height. So we just have to multiply

(we are allowed to change the order of multiplication)

So the area of the rectangle is 30.

q) An isosceles right triangle has a hypotenuse that is 8 units long. What is its area? 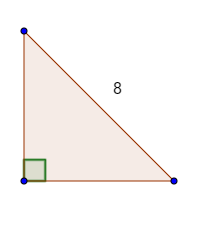 Since this is an isosceles triangle, both the legs are the same length. We’ll put

for the length of both legs. 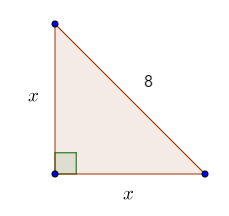 Now, since it is a right triangle, we can use the Pythagorean theorem to figure out what the length of the legs are.

So we know the length of each leg is 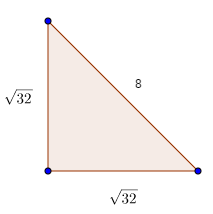 We know the area of a triangle is

height. So we do:

so this is equal to:

So the area of the triangle is 16.

It is easy to calculate the square roots of perfect squares, like 16. We know

. Other numbers, though, we need a calculator for. For example, we can put

into a calculator and we will get 4.795831523, which is actually just part of an infinitely long decimal. You won’t have to get exact values for these types of square roots on the SHSAT, but you should be able to estimate their value.

How do we estimate square roots? It’s simple! Let’s look at an example, say

q) Which is bigger,

The only way you can really add square roots is by combining common factors, in the same way that you can do

. You can only add multiples of the same square root

Now a challenge problem where you actually can add different square roots in a few steps:

First we have to simplify the square roots!

Subtraction works basically the same as addition. An example: